My writing beyond the blog: Colombian-born artist Jessica Angel (pictured above) is no stranger to big ideas. But when UAB asked her to reimagine the soaring, angled interior of the Abroms-Engel Institute for the Visual Arts (AEIVA) earlier this year, she decided to explore something huge. Like the universe.
Angel’s large-scale, site-specific installations have taken visitors to new dimensions both nationally and internationally. As AEIVA’s first artist in residence, she recently spent 14 weeks in Birmingham creating “Facing the Hyper-Structure.” The mind-bending, eye-warping work “brings together the concept of space” through art, architecture, and science, she explains.

“There’s plenty of nitty-gritty in this story,” Willie Thompson, the Director of The Fitzgerald Museum in an overcast Montgomery, Alabama, said as he began discussing the tumultuous, passionate and roaring romance of the Jazz Age writer, F. Scott Fitzgerald and his muse, Zelda. 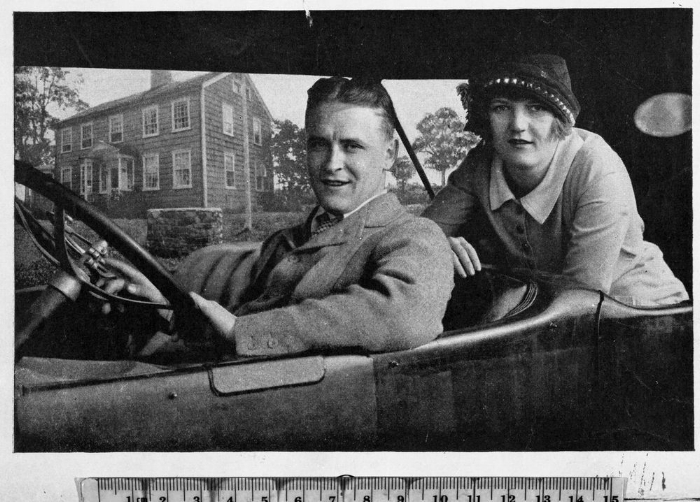 Montgomery’s area of Cloverdale sits wedged between an interstate and Spanish moss. Minutes from Alabama’s state capital building; this area has age—and the columns to prove it. A block away from a cobblestone road lies the Fitzgerald Museum, a glimpse into the lives and former home of the author responsible for “The Great Gatsby,” “This Side of Paradise,” and “The Beautiful and Damned.”

“If you want to visit a place that Scott and Zelda lived in and rented as a family, this is it. It’s the closest thing they have to a family home, and the reason for that—caveat—is because it is in Zelda’s hometown and they had every intention of settling,” the director said in his office, now filled with the conveniences of 2016.

But the story of the Fitzgerald love story doesn’t begin in the 1930’s on Montgomery’s Felder Ave.; it begins much earlier, before the roaring 20’s, the mental breakdowns, and novels that took readers through rides all too distant and all too familiar. The story of the infamous party couple began nearly 100 years ago, with a teenage girl born a rebel, and an Ivy League soldier, smitten with a young Southern Belle, and Montgomery, Alabama, as the setting.

Zelda Sayer turned 18 in the summer of 1918. The daughter of Alabama’s Supreme Court Justice, Anthony Dickinson Sayre, and his poetic wife, Minnie, Zelda was the youngest daughter of five children.

With large age gaps between her other siblings, Zelda grew up spoiled, a tomboy, and with a “preacher’s daughter” mentality.

“She had that complex…Boys go skinny dipping, so guess what Zelda starts doing: going skinny dipping. Boys smoke cigarettes; women aren’t supposed to smoke cigarettes, that’s why cigarette holders were invented by the way…you were obviously not supposed to drink if you’re a woman. There’s a whole culture of ‘man-things’ that Zelda got introduced to because she’s a tomboy because her closest sibling was her brother,” Thompson said about Zelda’s predisposition to a lively and nonconforming personality.

This ease that Zelda possessed around boys transformed into her ease around men as she grew older. According to her biography by Linda Wagner-Martin, the southern belle (after graduating high school) spent most of her time navigating multiple dates, and her family became used to constantly ringing doorbell from suitors fascinated by the youngest Sayer’s charm.

After the two graduated in 2013, Sabusap, a biology major moved from Tallahassee to Birmingham, where she would begin her doctorate program in Pathobiology and Molecular Medicine at UAB. Hlubuny, an anthropology and theater major, however, left the South, moving to Brooklyn N.Y. to pursue a career in art. The two maintained a close friendship, but when Sabusap felt like her immersion into science at UAB meant abandoning her love of art she decided to start a project that would unite her love of research with her love of art before she packed her bags. So she called her friend.

“She called me up this autumn, and she said, ‘Lauren, you need to come to Birmingham so we can do an art and science cross-over piece.’ And I said, ‘I’ll be there in January,” Hlubuny said.

During the phone call, the two determined what area of science they wanted to explore.

“She asked me what are you interested in researching in your art right now? And I immediately said: the subconscious, dreams and memory,” Hlubuny said to Kscope. “And she said, ‘oh I just ran into one of my friends who is a neuroscientist and she’s in this really amazing memory research lab. And the lab is famous for their research.’”

Once Sabusap convinced Hlubuny to collaborate with her on a science and art “bridge building” enterprise, the two both agreed that memory was the most achievable and significant topic to research from both a scientific and artistic approach.

“Our starting question for the whole project was how to explore long-term memory reconsolidation. Long-term memory reconsolidation has been a budding neuroscience field, it’s been difficult to study,” Hlubuny said. “So what happens in your brain is you have an experience […] the experience gets packaged into a packet of memories, and this happens through a series of proteins, and in order for it to actually work—on a molecular level, things touch each other and they manipulate each other. And what happens is once it’s packaged in its long-term memory stage every time you recall it becomes labeled, modifiable and unstable—[every time] you recall a memory, it’s called reconsolidation.”

After studying how artists interpret memory into their art like painting and how dancers learn choreography, the pair learned more about how the memory reconsolidation process worked on a more physical level, but now with help from UAB neuroscientists.

“People are noticing this particular part of memory research, and we just happened to know the right people at UAB, because UAB is a leader in neuroscience,” Hlubuny said.

According to Sabusap, their most exciting connection in this process of creating their fused art and science installation came from studying Hlubuny’s choreography.

“So we discovered that you cannot pick up a memory from an EEG. So when we go to different labs that specialize in using the EEG, which is an Electroencephalogram, like EKG but for the electrical signals in the brain instead. So they covered cognition and they studied the memory of loss, but they’ve never even attempted to put an EEG on someone and say ‘can we visualize a certain type of memory?’” she said. “So neuroscientists have been really interested in what would happen if you strapped an EEG to a dancer, you know, what would happen if we used the EEG on a dancer learning choreography over a long period of time. Because these scientists on their regular experiments, you know what they’re doing? There having people stare at red or blue dots. Or they’re having them read lists. So it’s really opening the door to ‘are these the types of experiments that we should be designing?’”

These uncoverings will be united in their exhibition which will take place on three days in three different locations: April 7 at the Birmingham Museum of Art, April 13 at the Edge of Chaos in Lister Hill Library and April 14 at Homewood Public Library’s “Discoveries in the Making.”

The event will be one part neuroscience seminar, one part art display and one part interactive experience, which includes the studied choreography performed by Birmingham Contemporary Dance: something that the pair hopes will engage the community.

“This is [an experience] that we have all done for the first time, so when people feel that uneasiness, it’s ok you’re on the same page as us. And I guess as a scientists a lot of us do outreach—I guess at the end of the day we just wanted to create a community that’s not just isolated but are insulated. So at the end of the day, I hope that people who go to the museum, or the library, the Edge of Chaos, and say ‘hey this exists!’” Sabusap said.

Good Grit Magazine-“Alex Smith Opens Up About Exposing The Machine”

When I arrive in Tuscaloosa, traffic and tents litter the University of Alabama; new faces from Louisiana and the rest of the state arrive on campus, congesting the rainy atmosphere with sheer nervous energy.

Walking through the halls of the Ferguson Center, Alex Smith, a tall, poised Majorette seems to disregard any sense of nerves the campus might have felt before facing Louisiana State University in football. She exudes confidence—a much-needed characteristic when ruffling the feathers of the entire state of Alabama.

Alex, a student government association senator, is now walking in the national spotlight after she wrote almost two weeks ago, “Why I’m Leaving the Machine,” in the campus newspaper. Soon, the statewide media group picked up the letter, spreading it from the hills and coasts of Alabama. Later, national media eager to hear her story called the Huntsville-native: The girl who exposed the University’s century-old political voting bloc, Theta Nu Epsilon, an elusive supra-fraternity better known as “The Machine.”

Is my writing a good fit for your blog or publication? I would love to contribute! Please fill out your contact information here so we can get in touch.